What will change in the future of the manufacturing industry?

Let’s first look at some demographic facts: in 2010 6.9 billion people, with an average age of 29,1 years old, lived on earth. The expectation is that the total world population will increase to 9.2 billion in 2050, a growth of 33%. In this same period the average age will rise to 38 years.

People will desire a higher quality of life and thus the demand for products which monitor and support our wellbeing will increase as well. Think of examples as an increase in smart equipment that continuously monitors our health, but also prosthetics, joint improvements, organ replacement, robotization in and on our body, etc. The wold population isn’t the only thing that will grow, the number of people living in prosperity will also increase exponentially. This will propel the demand for overall mobility. At the moment, however, the demand for mobility results in a burden on the environment of our planet; a subject that has been at the top of the agenda for years.

Back in the day, when the air was still clean…

Very few people know about it, but around the year 1900 there were already many electric cars. In the US, 34,000 fully electric cars had already been registered and 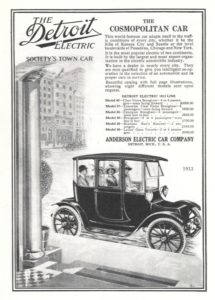 50% of all cars in New York were electric. Because these cars were not cool enough, they even installed unnecessary radiators to look like ‘real’ cars with a combustion engine. Due to the start of mass production of petrol engines in conjunction with the strong lobby of the oil-industry, it has taken almost a century before electric driving received considerable attention again. Not everybody is fully convinced that electric cars are our future mobility.

There are still plenty of challenges, but it is certain that the impact of mobility on the environment has to decrease quickly and the technology that realizes this, will prevail.

For suppliers of the automotive industry, much will change within the foreseeable future. There are far fewer parts in an electric car than in a car with a combustion engine. Just think of the lack of the fuel engine, the starter motor and the gearbox with all moving parts, that will be redundant because of this.

It is expected that more parts will be requested by the medical- and robot industry in terms of lifetime extension and additions to the human body. On average these parts will have a small diameter, which will have a considerable impact on machining companies.

Alternative production processes such as 3D printing will be further developed and in the future this will provide a small part of the products for various industries. However, serial production in high volumes of metal products will not be bothered by this. Injection moulding of both plastic and metal products will also develop further.

Digitization will play a very important role in the machining process; the programming of machines and robots has already become more user-friendly, but this will be simplified even further by the application of Big Data. CNC machines will recognize that certain operations and/or situations have occurred before and eventually programming as we know it, will almost completely become unnecessary.

The dimensioning of products will also be 100% controlled immediately during production, as a result ‘zero defects production’ will be continuously. All this will happen rapidly as soon as our machines and systems are connected to each other and we can make effective use of all the data we collect. Industry 4.0 is in other words “data driven manufacturing”.

“Do not experience the future as a headwind, because then you’re going in the wrong direction.”