Synergy in the Dutch manufacturing industry

Why the Netherlands is taking a leading position in Europe

Due to globalization, the Western European manufacturing industry has seen firm competition in several low-wage countries for around 20 years. Initially relatively simple production techniques were used, but as time went on, companies in Asia, Eastern Europe and South America invested considerably in machinery, knowledge and high-quality production techniques. The level of competition has increased significantly and therefor the need for Western Europe to produce smart too.

The use of intelligent production techniques is already the standard in Europe, but this will not be enough in the short term to maintain the lead. Countries such as Germany, Switzerland and France are known as leaders in the manufacturing industry in the field of technology. With only the use of the appropriate production technique will eventually be overtaken by Asia.

Top of the class

However, there is another strong ongoing development which will ensure that the lead is maintained: cooperation in development and production. Research shows that in the last three years, the Netherlands has been top of the class in this area. Cooperation is seen by Dutch companies as the greatest opportunity. The result is sharing knowledge and horizontal integration in the supply chain and ultimately; competitive advantage.

Because a wide range of customer needs can be met, many companies in Europe use the services and products of several Betech companies. In many cases, Betech has the right technology and advice to use the most efficient production process. 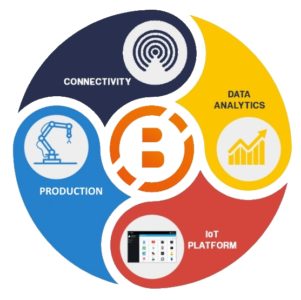 In the very short term, both internal and external business processes will be driven through software platforms. The first components of the self-developed Betech platform has already been completed, which means that production data from various Betech locations, among other things, can be used in real time, without human intervention, to produce even more efficiently and faster. This data can be automatically shared with customers and suppliers so that together we can gain more competitive advantage. This includes direct access to:

Great things in business are never done by one company. They’re done by a team of companies.