Investments in machinery during Covid-19

In the past year, Betech Mass Turning (Hoogeveen) has invested heavily in digitization, automation, but especially in expanding production capacity and possibilities. With the purchase of a total of 6 CNC lathes and 3 robots, the total comes to 65 CNC machines. The production lines are all equipped with automation so 24-hour production is facilitated. In addition, the diameter range of bar- and tube material increases to Ø80 and with robot in- and output even up to Ø120 mm.

The investments are partly based on a concrete increase in customer needs, but mainly on the great catch-up that will take place. Betech expects that the demand for production capacity in the Netherlands will increase exponentially for three reasons: 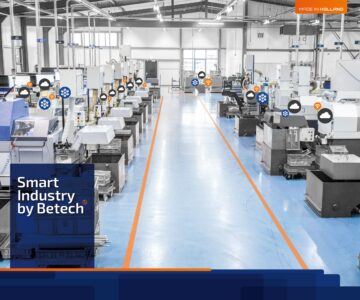 The uncertain past- and coming period resulted in a decline in demand for new machines, consumer goods and overall long-term investments worldwide. However, the positive change is coming; November’s Nevi PMI (purchasing managers index) came in at 54.4, marking the biggest improvement in business conditions since January 2019!

The increase was mainly the result of a further revival in production and higher purchasing and selling prices. Both companies and consumers have postponed many purchases in the past year. Betech expects a further increase in demand for the coming year as a result of the Corona crisis.

The resilience of the supply chain has been tested several times in recent months. Many Western European OEMs have moved their supply chain to low-wage countries for 20 years. The awareness of the dependence on these suppliers, as an effect of Covid-19, has resulted in a strongly increasing choice for production in Western European countries.

In addition, in many cases it is possible to have products made in, for example, the Netherlands at the same cost and a higher quality level, due to the high degree of automation. Additional benefits such as supplier flexibility, the Dutch level of knowledge and being able to think along with customers are often decisive. In other words the Dutch manufacturing industry will see more demand in the short term.

2. Reduced available capacity due to loss of suppliers.

A large part of the European top-level manufacturing industry is located in Germany. Not only the consequences of Covid-19, but also Brexit, the trade war with the US and the electrification of the automotive industry has an enormous effect on a large part of the manufacturing companies. The effect is so extensive that many suppliers struggle to survive and also reduce their capacity.

3. The catching up of several industries due to expected increase in demand from industry.

For more than a year, companies and consumers have been postponing large expenditures and investments as a result of uncertainty in the economy. As soon as the economic recovery becomes noticeable, expenditure will accelerate, causing the demand for capacity in the manufacturing industry to increase exponentially.

Betech’s goal: MADE IN HOLLAND as a mark of quality!