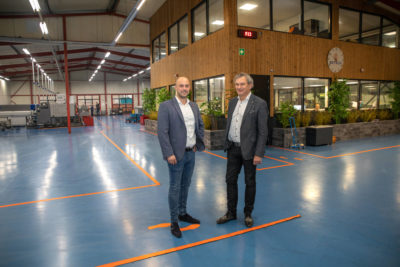 Smart Industry is a daily practice for mass turning company Betech Mass Turning in Hoogeveen. In fact, owners Wim van de Beld and Arjan Schuinder believe that digitization in combination with data analysis is the answer to an expected increasing competition in the machining industry. Betech can already compete with low-wage countries. A smart approach to internal transport plays a role in this.

According to Arjan Schuinder, the machine code on the screen showed an incomprehensible stream of green figures. “It took us more than half a year to really understand that code,” he says. By looking closely at the patterns, the engineers eventually perceived meanings such as machine counter, oil temperature, wear of tooling and other measurement data. Once they realized this, the data could be converted into comprehensible graphs and handy dashboards so that machine operators can see at a glance the order progress, the tool life cycle or any deviations from the set tolerances. “The machines are ours. We have purchased them, including the software and the data that they generate. But suppliers do not disclose that data. We really had to do that ourselves, “says Van de Beld.

Betech also had the software developed itself to connect all the software that works within the company in a modern way via an Enterprise Service Bus (ESB), internally and partly also to outside, to suppliers and clients. “We are talking about version 1.0 of the Betech Smart Industry Platform,” Van de Beld mentions proudly. 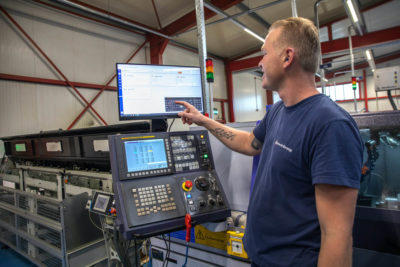 “Of course it is more expensive to do everything yourself,” Schuinder agrees. “And it is currently not profitable either. Because we have not connected all the machines at the moment and we are in the beginning of the process, even though we have been working for a year and a half and have spent about the price of a new machine on it. ”

But Betech fully believes in this development, which is also referred to as Smart Industry. Everything in the factory is connected with it. As much as possible has been automated and robotized. Still, about one hundred people still work at Betech, of which just half in Hoogeveen. With 95 CNC machines, Betech produces at three production locations (17,000 m2) in the Netherlands at around 90 million products per year.

The knowledge is supplemented during every new production run

Automotive & E-mobility accounts for around 50 percent of sales. Betech also works for, among others, the high-tech sector, the agricultural sector, mechanical engineering, the medical industry and precision engineering. All metal machining is done in Hoogeveen. Plastic machining takes place in Groningen and in Steenwijk injection moulding takes place. According to Schuinder, the labour-added-value costs on Betech products are negligible, which means that the company is able to compete with low-wage countries and, in the long term, is also able to cope with expected price dumping by machining suppliers for the automotive, especially from Germany itself. “The German metal factories have long been committed to the endless production of parts for diesel and gasoline combustion engines and are now trying to make the turn that we already started a few years ago,” Schuinder explains. “As they do so, they are expected to start pricing with prices just to keep market share.” 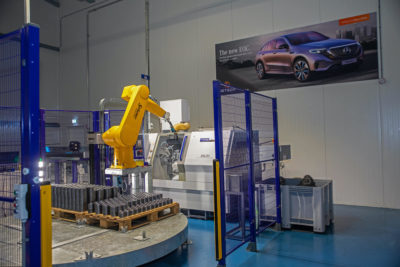 Betech also still does a lot for the traditional car industry in Western Europe, but has not been actively acquiring for combustion engine production for a few years now. Instead, Betech is fully committed to E-mobility. “Not only cars but also of electric scooters, bicycles and of course the entire charging infrastructure including the battery technology that is needed to maintain electric mobility,” says Schuinder. A crowning glory on this change of course is a million-dollar order for the latest electric Mercedes EQC. A separately highlighted and carefully secured corner has been set up in the factory for that purpose, fully robotized of course.

The factories run 24/7, but human presence is limited to eight hours a day. Operators are ultimately responsible for the orders on their machines, even when they are not there. Delivery time is holy. The focus is therefore on output, how they do it is their own business in which their own contribution to improvement is greatly appreciated. “That commitment and flexibility is rewarded by a pleasant working environment and good working conditions,” says Schuinder. Betech wants to keep its operators, who have an internal training course of no less than eighteen months on starting their employment.

That maximum automation and individual independence naturally requires first-class quality assurance. That is why the quality centre is at the middle of the factory. We operate based on statistical process control. “Because we know the data from our machines and processes, we know what we can expect in terms of capacity and capabilty. Moreover, this knowledge is supplemented during every new production run. The system is therefore constantly learning. Our quality controllers check randomly whether, for example, tolerances, volume progress and material use correspond with the predictions they have made based on data analysis. ”

Internal transport is essential for 24/7 production. Incidentally, not only during the unmanned period, even when the operators are present. Because the better the transport in the factory is automated, the more efficiently you can work. “And the less error-prone the process becomes,” adds Schuinder. That is why Betech has recently started working with AGVs – automatic guided vehicles, in combination with RFID chips. “We are still adjusting this”, Schuinder puts into perspective. “Not everything is always right. For example, we noticed that the AGV tires that we used were too slippery for the floor of our factory. The supplier must now supply different tires. “He expects a lot from it. In the near future, the chips in the baskets will be able to control the AGVs themselves. Positions and transport tracks are linked via the own Smart Industry Platform with the movements of the overhead cranes in the warehouse. Betech is currently experimenting with these new forms of internal transport and people are immediately confronted with new insights. Schuinder: “Our night-time security system was set up with motion sensors and goes into alarm immediately as soon as an AGV starts driving. Now we have had a completely new security system installed that can handle this.