‘In 1994 Wim van de Beld started an automated turning company in Hoogeveen, nobody had ever heard of circular  production. Also Wim himself had never thought of the concept, but unknowingly he already worked according to the principle. It was called efficiency improvement at that time. Betech has been focussing on circular production for a long time now.’ 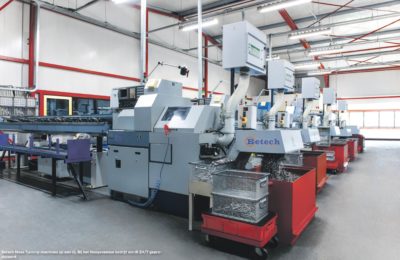 A part of Betech Mass Turning’s machinery, all lined up for 24/7 production.

‘Van de Beld knows; if you want to be competitive company, you have to work as efficient as possible. First of all

the use of labour was improved: how is it possible to produce continuously and still have a very low added value by labour? Then the next step followed: how do you use the material efficiently? And energy, and oil? And how do you clean your products? Meanwhile Betech Mass Turning is so serious about circular production that they also present it towards customers and suppliers. “We want to go on and go further. We see it has a very productive effect on our production process, says Sales & Marketing manager Arjan Schuinder. ‘Handling and where possible re-using raw materials, tools, energy, liquids and cleaning materials and other sources as good as possible enables Betech to be internationally competitive.’ 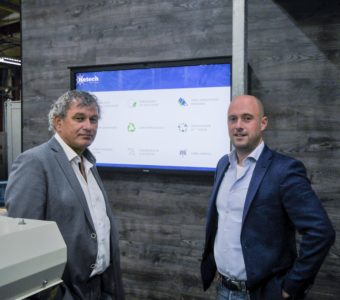 Wim van de Beld (left) and Arjan Schuinder certainly believe in the circular economy and want to lead by example.

Cleaning in a closed system

Circular entrepreneurship is reflected in the way which Betech Mass Turning cleans its products. The company has an automatic cleaning system. In the past thousands of liters of cleaning fluids per year were used to clean the products. Now only 300 liters is needed for the entire yearly production.

‘It’s a closed system,’ as explained by Schuinder. The liquid enters, cleans and preserves the products and returns as an unclean liquid. Then it’s filtered, heated and distilled until the fluid is as good as new so it can be re-used. This generates a considerable saving. ‘We use even less than 10% of what we needed before, while at the same time we definitely grew 200% in production output’, says Schuinder.

Chips are processed to grit

All raw material complies with the conflict minerals agreement. Also Betech pays more attention to the waste material. In the past chips were collected in bins and then transported by trucks, since two years all chips are crushed to extremely small particles in an own swarf processing plant. This machine breaks and crushes the small particles which results in much less needed space to store and transport all waste material. The outcome is significant savings and environmental benefits. In addition, the remaining grit is filtered which allows oil and water to be collected separately. The water is drained, the oil returns to the machine and is being re-used. This saves of a whopping 2.500 liters of oil per month. The small chips, separated in several kinds of raw material, go back to the supplier where its partly recycled into new bar- and tube material.

Corporate social responsibility goes even further at Betech Mass Turning; the production halls are all equipped with energy-efficient led lighting. Next year Betech Mass Turning wants generate around 35% of its own energy consumption by installing solar panels on all the roofs. This will be executed as soon as the expansion of 4.500 square meter in production halls has been realized. Betech recently purchased 6.000 square meter to build the new halls. The expansion was necessary, according to Schuinder. “We only have room for one additional machine, after that the company’s production halls are completely full.’

Van de Beld believes in efficiency and in automation. Seven days a week, producing 24 hours a day, with as many unmanned hours as possible. The presence of the operators is limited : the workday starts at 07.30h, at 16.30h the light goes out. Working in shifts is unthinkable. “Due to our strategy it is very important that in eight hours work we have to make sure we produce continuously for 24 hours. In this manner as much labour as possible is taken out of the process, “explains Schuinder. 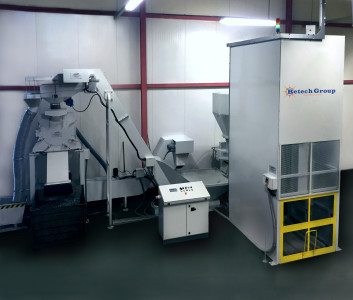 This swarf treatment plant breaks and crushes the chips into small particles. It has resulted in substantial savings.

“If you want to increase efficiency, you have to ask the operator how to make it possible for him to manage an additional machine. If you replace the repetitive work by a robot, the operator can engage with his actual work, such as adjusting the machine and especially optimizing production. It’s a big win when the cycle time goes from 22 to 21 seconds. One second seems insignificant, but multiply it by 1 million products and you’ll be happy to have improved it.”

Automate as much as possible

In the year 2000 Betech Mass Turning recognized that more and more companies shifted their production to low income countries like China. ‘It didn’t affect us directly, but we thought: if this continues, we can’t compete due to the Dutch costs of labour’, says Schuinder. Thus, Betech Mass Turning started automating what could be automated. On average one operator manages between 3 and 4 machines. He/she works eight hours while the machines run for 24 hours. This results in a maximum labor added value of 20%. Van de Beld aims to bring this percentage down to 15% in 2025. ‘Internationally we are highly competitive and we want to stay ahead.’ As evidence Schuinder mentions the large share of customers in Eastern Europe. ‘Eastern Europe consists of low income countries, so we have to produce very competitively to be able to keep supplying. Even so we still succeed in competing.’ This efficiency in employment is never at the expense of the employees. ‘With the exception of crisis year 2009, Betech grows every year by about 10% to 15%.’

Betech Mass Turning looked more intensively at circular production after customers wanted to know how clean their products were being produced. After all processes were investigated, it revealed that Betech was already on the way to circulation production, but hardly presented itself that way.

Van de Beld felt this had to change, because especially when you’re supplying customers internationally, it’s highly important that everybody knows how clean the products are being produced.

In Germany the circular economy is already a major theme and in the rest of Europe it will get more and more important, expects Schuinder. ‘Within 2 to 5 year circular production will become much more important. That’s why we rather get ahead of the competition.’ In addition, the business strategy of the Betech Group complies with this theme: ‘Through continuous investments in innovative production techniques and knowledge level Betech wants to be the example for European production companies.’